When Worlds Collide - The Book of Remy - Stalled

I am going to do something I have never done on this blog in the past twenty-plus years, I am going to stop a story before it is finished. Remy has found this recounting of his past very painful and is currently refusing to enumerate any further his earlier misdeeds.

His pact with Morrigan in order to be with Nithbeth, in his estimation, was the worst choice he ever made. It led to a series of events which bought vampires into existence and into our folklore. Even I do not know the details.

So, until our taciturn Willow Gate Keeper deems to talk to me, I am without recourse in the matter of listing his past achievements, good or bad.

I hope you will forgive Remy and me.

Until then, I give you a short story previously published in 2015, which some of you might have missed. And next week we will go off on another adventure with Yakov Hightower. The captain is always willing to chat with me about his exploits. Much like a dragon, he has a bit of an ego.

So on to, “Yakov Hightower and the Glitter of a Pirates Booty”. 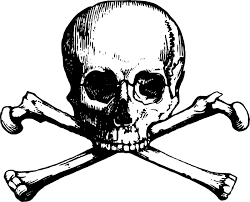 When Worlds Collide - The Book of Remy - Chapter Seven

Cleitus lived in the magical OtherWorld for decades. Time progressed differently in those days. The OtherWorld and the mundane were on separate clocks. While the Romans worked on conquering Britain, and ridding the island of the Druids, Cleitus investigated his new home.

He found ‘gates’ that took him to places he could never have dreamed existed. The part of the OtherWorld which he had been led into was a hub to a hundred other worlds, maybe more, and each contained magical beings of unbelievable power.

At first, he was guided by the siren who coaxed him into her world. She was a seductive companion and soon he lost track of where he was. He would have had no idea of the direction in which to turn to escape her, if he had wanted to. But in time, the decision was not his. She grew tired of her new plaything and left him behind.
Read more »
Posted by Theresa Snyder (3su) at 10:59 AM No comments:

When Worlds Collide - The Book of Remy - Chapter Six

In 168 B.C. The Romans defeated Perseus of Macedonia and abolished the Macedonian monarchy. In 146 B.C. the Romans destroyed the Achaean League in Greece. Cleitus no longer had any countrymen or country to go home to. He joined the Roman army as they adopted the training methods used in gladiator schools.

Cleitus witnessed the death of Spartacus who led 40,000 fugitive Roman slaves in an uprising. He stood and listened as General Marcus Licinius Crassus issued the order.

Over the decades, Cleitus had become an unstoppable warrior. He had learned every fighting technique imaginable. But, his soul now silently began to yearn for peace. For the days of the vineyard as Zeuxis. He longed to get away. He saw the opportunity in 55 B.C. to escape at least his current environment. He joined Caesar’s army as it invaded Britain. It was during this invasion that Cleitus first came in contact with the OtherWorld.

When Worlds Collide - The Book of Remy - Chapter Five

Cleitus’ spirit sat weeping on the berm above the ditch where his body had been dumped and covered with sand. He didn’t have to dig it out to know it was there. He could still feel the connection. The tug on his soul that kept him bound to the earth rather than flying to a life in the heavens with the Gods. How could Alexander be so cruel? How could he have failed to honor him as was called for in their culture, and as befit the man who saved his life and fought at his side for years?

He wiped his tears from hollow eyes and spat to the side in anger. His head was filled with vengeful thoughts. Revenge gripped the soul of this now troubled spirit. Cleitus would haunt his king until the day he died. Alexander could not have known that no matter what he did, what god he sacrificed to, he could never amend this fatal error in judgement.
Read more »
Posted by Theresa Snyder (3su) at 2:01 PM No comments:

When Worlds Collide - The Book of Remy - Chapter Four

After the fall of Persepolis in 330 B.C., Alexander the Great saw his chance to have a unified army loyal only to him. The crisis in Greece was over and he need not worry about the home front. Now Persia was within his grasp too.

He demobilized his troops paying them handsomely with the spoils of war. He hoped to rid himself of the old guard he inherited from his father, King Philip. He wanted an army he could control. Alexander had the spoils from Persepolis. He offered a bonus to any cavalryman or infantry soldier who wanted to reenlist. What he offered was hard for any sane man to refuse. Including some members of the old guard, like Cleitus the Black.