Tal’on watched the green come and go as he finished up his meal. She dragged in numerous things that looked like their skins, but were in large squares. She spread one out on the stone beneath her feet and piled the others at her side. After making several trips she appeared to tire and sweat formed on her brow to dampened the fur that fell across it. Tal’on watched with horror, his mouth full of the last morsel off his platter, as she shed her outer skin and threw it to the ground. She proceeded to pull off another layer of her skin and wiped her face with it before she tossed it to the pile on the large skin. She now stood with only a layer of green around her chest and covering her legs. The rest of her, neck, shoulders, arms, appeared as her hands and face, pale and soft. Tal’on didn’t realize it, but his mouth was hanging open in surprise.
Read more »
Posted by Theresa Snyder (3su) at 8:21 PM No comments:

Delevy pushed the platter, of what Tal’on could only assume was food, toward him with her handy broom handle. She had been in and out over the last few hours. The young dragon decided she had been assigned as his guard. She lengthened the chain that was attached to his neck by flipping a lever on the wall which allowed the ring in the floor to detach and rise up on its own length of chain. The young dragon could now stand and stretch his legs.
Tal’on reached out and fingered the ‘food’ on the platter. It was some sort of vegetation – multiple colors and textures. There was no meat visible on the tray. Nothing that Tal’on would actually term as food. He pushed the stuff around with a claw. He was ravenous. He had no idea how long he had been without food…long enough to feel a bit dizzy when he stood…long enough that if he were home he could have eaten a full grown Crazar without difficulty all on his own. He looked up into the green’s smiling face. She encouraged him by signing an eating motion with hand-to-mouth.
Read more »
Posted by Theresa Snyder (3su) at 3:36 PM No comments:

I hope you can make it to this free family event, with over 200 authors, publishers, and writing organizations.

I'll be at booth space #21. Look for the Dragon balloons. Stop by to see the 'First Ever Dragon Selfie' and have your picture taken with Farloft, my dragon.

I will be signing copies of all my titles.

Tal’on landed on his feet without Graf’tal beneath him. That in itself was surprising enough, for he had just been astride the elder dragon seconds ago. Even more upsetting though was the fact that he was not anywhere he had ever seen in his lifetime of over one hundred years, and surrounded by beings totally alien to him. He recognized only those three facts before the intense vertigo he felt from the aborted Jump brought him down on all fours to steady himself on the unusually patterned rock surface below his feet.
The beings were screaming and shouting. They were small, two legged creatures with pale, non-scaled skin from the neck up and on the hands. However, the rest of their bodies were all different colors. As many colors as Tal’on had seen in all his life and then some. No two appeared the same. On their heads they had fur like the beasts his kin hunted and ate at home. Some ran away from him, while others charged forward with metal sticks. When he raised his clawed paw to fend them off, they struck at him with the sticks. The weapons were charged with something which made the muscles in the area hit contract violently, causing great pain.
Read more »
Posted by Theresa Snyder (3su) at 4:05 PM No comments:

Thought you might like to know what we authors go through to prepare for a large book fair. I hope you enjoy the post and maybe even drop by for a visit if you are in the area.
Prep for the 25th 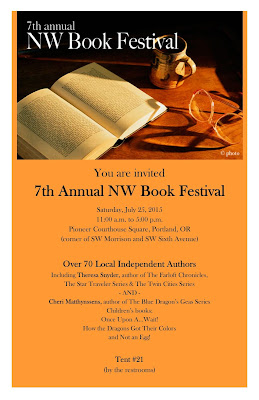 Tal’on vaulted onto Graf’tal’s haunches, finding purchase with his claws between the plates of his senior’s scales.
“Careful there youngling,” Graf’tal chided. He curled his long neck around and spied the young wingless dragon, his charge, with a shinny pair of obsidian black eyes rimmed and flecked with gold. “Why can’t you mount like any normal youngling?” He snorted smoke into the face of the lizard looking Tal’on on his back. “You scramble like a hatchling.”
“I would board properly by wing if we were not always the last to leave the ground,” Tal’on shot back as he finally made it up Graf’tal’s back and settled on the dragon’s shoulders with his scaly legs wrapped around Graf’tal’s neck and his tail lying out along the dragon’s spine.
Read more »
Posted by Theresa Snyder (3su) at 1:47 PM No comments: 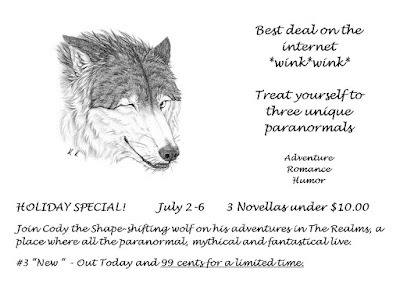