The next day, Rugarth led his party in a wide sweep of the volcanic island below them as he roared a greeting at the top of his lungs. Farloft wondered what was in store for them. Perhaps he was going to be introduced to another clan of dragons on this mysterious island.

The volcano at its center puffed plumes of smoke and ash. Farloft could see a river of lava trailing down its side and bisecting the island in its rush toward the shelf where it fell off into the sea creating giant clouds of steam. On either side of the lava the island was lush and green with huge palms and oasis’ of little valleys with glittering pools of fresh water. It was in one of these valleys that the party landed, in a meadow, beside a pool.

“Should we go up?” Daldrath asked excitedly.

“They saw and heard us. They will come down.” Tempith tucked her wings and lowered her head to the pool for a drink.
Read more »
Posted by Theresa Snyder (3su) at 10:49 AM No comments:

It was three days later and the dragon party sat behind a long table with the remainder of their gems spread before them. There had been no further contact with pirates on their journey through the last of the swamp to the Isles of Ryland.

The people of Ryland welcomed them with open arms. They prepared a feast and brought them presents of jeweled collars and gilded arm cuffs. The human children wove garlands of flowers to drape over the dragon’s heads and ringed their horns with bands of silver and gold.

“Is the dragon steel for trade,” one merchant asked, as he approached the table. “It would make some truly amazing crowns and pendants with the addition of a few of these fine stones.” He waved his hand at the gems scattered across the long table.

“I would like to make you a gift of mine,” Tempith said with a nod. “If I might commission a piece in return to be picked up by Rugarth on his return journey.”
Read more »
Posted by Theresa Snyder (3su) at 7:49 AM No comments:

The female dragon had been set upon by three of the flying contraptions of the swamp pirates. Their weapons cut into her flesh as they strafed across her. The sharp metal of their wings kept her from grabbing them by paw or teeth and throwing them into a spin. Every time she reached for one, it tucked its wings and dove in to rip another line across her vulnerable stomach or wing.

As the others tried to run toward the outcrop that jutted up out of the swamp to their right, Rugarth and Tempith did their best to fend off the pirates, but Colith’s wing had been injured in the first few minutes of battle and she had fallen behind. Her baskets of precious gems kept the pirates on her tail trying to drive her to ground.

BOOK OF THE DAY! "Shifting in The Realms"

Shifting in The Realms is OnlineBookClub Book of the Day
Sunday, October 9th.
Why not pick up a copy for you or a friend for Halloween reading?
Vampires... Fire Demons... Shape-shifters...
Everything you could want in a great 90 minute escape!
https://www.amazon.com/dp/B00I5AST5U/ 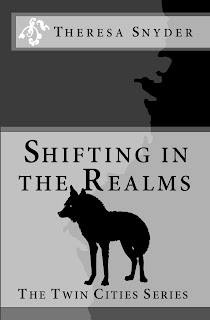 Gord was unlike anything Farloft had ever seen in his world, or in this one. The colony was huge and the buildings were tall spires made up of steel and glass that reflected the sky and clouds around them. The dragons sailed in among them tilting their wings and catching the thermals and wind tunnels created by their height and close proximity. Rugarth lead them to the largest, and tallest, of all the towers, where he landed and tucked his wings in order to sit.

They all followed his example and lined up in a group behind him to wait.

It wasn’t long before a committee of Gord emerged from a door on the roof to join them. They were all dressed the same, male and female, in pantsuits of varying shades of gray with only a band around their upper left arm as a symbol of their rank within the community – red being the highest official, down through blue, to green, and finally to yellow. All colors were represented in the reception committee.

After almost an hour of walking they finally approached the main settlement of Tilmor. All the teams of working animals had been brought in and put in their corrals. There was no one visible except for a single female human standing in the middle of the town square with her hoe in hand.

“It is Dresda,” Tempith said with a sigh of relief over her shoulder to the younglings. “She is wife to the leader we dealt with last time we were here.”

Rugarth pulled up at the edge of the settlement, the rest of the dragons came to a stop behind him. He churred to Tempith and she advanced to his side.

“I think you should take the lead,” he said to Tempith and nodded in the direction of the human.
Read more »
Posted by Theresa Snyder (3su) at 7:46 AM No comments: