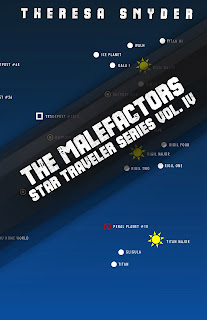 What happened in the year 30-31 A.R. (After Reestablishment) that threatened to shatter Garrett and Pon’s new marriage before it even had a chance to flower? Can a child rescued from certain death at the hands of the local Guardians on Goliath’s Third Moon be the catalyst to save their marriage?

Meanwhile we are led to the rainy, dank planet of Walh. The ruling family has found out disturbing information about Targus which will send the M.T. team spiraling out of control.

It is only through Terrell's inherited ability to learn languages and his persistence that Targus may escape his fate in a society that is scarcely more than medieval in its technology. But, in order for Terrell to save his captain he must resurrect and conquer the hidden demons he has tried so hard to bury.

Terrell heard the ship's intercom come on. Targus and Coal once asked how he knew to answer before either one of them spoke over the ship's communications system. He said he could hear it sigh as it came on. He didn't need to wait to hear their voices.

Too Many Dragons - The Farloft Chronicles Vol. 4 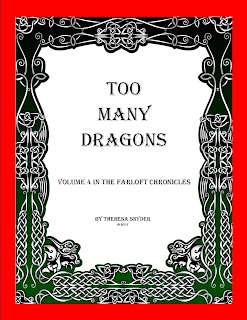 A messenger from the Far East has come to retrieve a valuable item from the Healer, Theresa. But, is he all he seems? Should Theresa trust him with the talisman given to her for safe keeping?

The foreigner is accompanied by Thrax, an Eastern dragon, with a history that dates back to Farloft’s younger days. Were they friends, or mortal enemies?

Will the Healer and Farloft survive this encounter, or will the visitors from the East leave the Kingdom victorious over their dead bodies?

Last episode of "On the Trail of Ezekiel Watts"

http://startravelerseriescompanion.blogspot.com/
Posted by Theresa Snyder (3su) at 7:26 PM No comments:

If you were reading the Farloft Chronicles on this timeline, I apologize.
The chronicles have been moved to their individual volumes on their respective sites.
Please see these sites on the right-hand banner under Farloft Chronicles.
Thank you and Happy Reading!
Posted by Theresa Snyder (3su) at 3:46 PM No comments:

Short story: On the Trail of Ezekiel Watts


Posted on the Star Traveler Companion site
Posted by Theresa Snyder (3su) at 5:44 PM No comments:

I am posting a new story on the Star Traveler Companion site:


Just posted episode #5.
Backtrack and read
"On the Trail of Ezekiel Watts"
Part of the missing years in Vol. I of the Star Traveler Series
Posted by Theresa Snyder (3su) at 6:58 PM No comments:

Have you checked out the Star Traveler Companion site?

"On the Trail of Ezekiel Watts" is a story of adventure, torture and betrayal.
Check it out. New posts weekly.

http://startravelerseriescompanion.blogspot.com/
Posted by Theresa Snyder (3su) at 7:38 AM No comments:

Star Traveler Companion - On the Trail of Ezekiel Watts

In Vol. VI of the Star Traveler Series (Coming soon to Amazon/Kindle)
I left Watts hanging when he said:
"I'm going to crawl in the deepest, darkest hole I can find and just stay there until Braden's caught."

On the Trail of Ezekiel Watts
(The story of how and where Watts found that hole.)

I will be posting to the Star Traveler Companion site once a week with this continuing story.
(Numerically listed)

http://startravelerseriescompanion.blogspot.com/
Posted by Theresa Snyder (3su) at 9:08 AM No comments:

Come on over and we'll chat.
We can discuss my books, other works by authors I am following, scifi concepts, gardening, your cat, what you had for dinner...

Check out the continuing story of 3su's adventure on Alta III in Special Delivery .017 edition of the Star Traveler Update.


http://startravelerseriesupdates.blogspot.com/
Posted by Theresa Snyder (3su) at 9:16 PM No comments:

Vol. 2 of the Star Traveler Series, The Heirs of Henu is now available on Kindle.


Volume 2 finds Jake and Arr restless after a little less than a year on the Henu planet. Their uneasiness at being planet bound is only heightened by a trip to one of Jake's ‘surprise’ birthday parties. The guys find their problem of how to get back into action, without going back into the life of a mercenary, solved by the Henu and their bountiful planet.

But, reopening the trade route for the Henu grown spices runs afoul of one of Tim O'Malley's missions gone critically awry. Jake’s surrogate dad has inadvertently pulled Jake and Arr into a life or death situation that can only be thwarted by assistance from a Galactic Forces Mobile Tactical Team, M.T. #2424.

Captain Targus, Pilot, Species: Walhmite, Height: 7’8”, Information of Note: Graduated top of his class at the Galactic Academy. Captain of his own vessel at 24 yrs of age. Highly intelligent, thoughtful, considerate, but don’t make him angry.

Sergeant Coal, Computer Expert (EC), Species: Realdat, Height: 7’4”, Information of Note: Species all look the same and can only recognize one another by their vivid and intricate tattoos. Coal could make an Intergalactic Network Computer information flat cook you breakfast if he so desired.

Doctor Damion Mitchell, Medical Expert (ME), Species: Human, Height: 6’4” (minimum height for a Galactic Officer). Information of Note: Child prodigy, given special dispensation to attend medical school at 12 yrs of age. Entered the Galactic Academy at 15 graduated at 16, something never accomplished before or since. 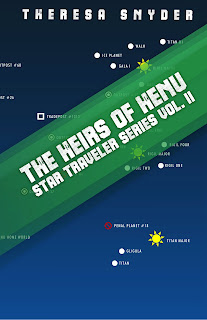