It's been over a year since I posted to this blog. It used to be a weekly post for which I did not fail, but times change and so do people.

In my last post, November 2020, I explained that my father had a heart attack, but seemed to be recovering. I am so sorry to say, he didn't. He died November 11, 2020, leaving me and the family cat, Watson, in a very lonely and seemly forgotten state.

Things are a bit better now. We both have worked hard to adjust to our quiet home. The holidays were far better than last year, which seemed inexistent.

I've had a difficult time getting motivated to write. I am a naturally sociable animal and need that input. The loss of dad, my compromised immune system due to my lungs, and the pandemic make socializing more than difficult. Without it, I find I have very little to interest me in putting fingers to keys and creating.

However, I have written a handful of short stories over the past year. I thought that I would begin to share them with you. My intention is to post once a week again. Whether I can follow through on that or not, I cannot say. I will try and commit.

I hope these stories are thought provoking and in their way entertaining. I've just taken the world a step further down a path I hope we will not end up on in the future.

My father said he named me Honey so he would always have something sweet in the house. He was born during the first wave of the Cauldronvirus, or Cull as it is now called.

The name of the virus was also appropriate. It burned through our planet’s population like fire, culling us down to little less than three billion from what was close to seven and a half billion.

Over the past ninety-five years we have learned to live with the constant threat of exposure, but it took us way too long to recognize the danger, hence the deaths of over half the population.

Today, we live with it. I grew up with it looming just outside. No open windows or doors. The virus, which started as a direct contact contagion when my father was born, became airborne by the time my father was less than a year old. ‘Stay at Home’ orders from the government were not enough to contain it. If you wanted to be safe, you quickly equipped your home with an air filtering system, and you didn’t go outside without a hazmat suit.

My grandparent’s generation were scared to let their children out even with hazmat suits. They remembered their time running free outdoors, and the rough and tumble childhoods they lived through. They were so afraid their child would puncture their suit that many refused to buy them. Dad told me he heard stories about his mother and father’s adventures, but he was never allowed to roam beyond the walls of this house.

My father’s generation never shook hands, never touched. Never kissed unless they were in the same household. Houses were modified at the front door to have a ‘safe delivery area’ where groceries and other supplies could be dropped off. Most of the earlier areas were no more than a four-by-four box. Everything in that space was exposed to a strong ultraviolet light to kill the Cull before the item was brought into the house. Later there developed a need for larger ‘safe rooms’. They allowed for the passage of the remains of a victim of the Cull out to the Disposal Team. My grandparents had both died before I was old enough to know them. Our household consisted of Dad, Mom and me.

My father met my mother online. By the time he was in his late teens the internet was the only way you met people. They courted online. Dad introduced his parents to her online. After all, if she agreed to marry him, she would move in with the three of them. Lucky for me she applied for a permit to travel, dawned her hazmat suit, and made the trip from New York City to Portland Oregon.

I have lived in this house all my life. In the old day’s dad used to say I would be cataloged as paranoid… I am afraid to go out into the world even with a suit. I get my supplies delivered to me through the ‘safe room’.

I shipped my dad and mom’s body out through the ‘safe room’.

I will die and this house will sit empty… deserted… I never found anyone online to share it with. No one to leave it to. Mother nature will reclaim it as she has her planet. We are just specks of dust on her surface… for now. 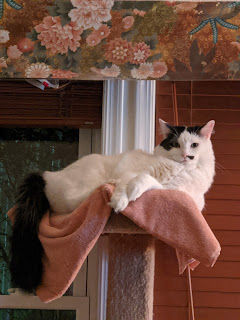 Watson and I hope you enjoyed "Honey the Humble".


I apologize for not posting this past Saturday, but life got in the way of art. My 94 year old father, who lives with me, experienced a heart attack. He is recovering slowly, but it may be a while before I post to the blog again. I hope you will scan through the other stories I have here and find something to keep you busy until I return.
Thank you so much for your readership. I love you all.
Once dad and I have established a new routine I will be back with another great story either
sci-fi, fantasy or paranormal.
Don't forget to check out my main website for free books and great series.
Theresa Snyder's Books
Now on with the conclusion of our story...
051.01


“I was one of the first to hear its call,” Mul’drak told us. “Tal’on was my father’s Great. When I was a youngling. I listened to his tale of Tal’on over and over again.”

“So, it was at least three generations between Tal’on’s capture and the Sollen sounding again?” Jake asked.

“Yes, and for your humankind, many, many more generation,” Mul’drak said. “You live such short lives.”

“When the call came five of us answered. We mistakenly thought five was enough,” the old dragon said and shrugged his shoulders making his wings rise in the process. “We found out later that the Prime passed on the story of the Sollen and its location through his family and political associates as Tal’on and my father had passed it on to us. In fact, the ruling of the Valdare had been retained in the Prime’s family line. When we arrived, we found the Valdare had developed into an advanced technological society with no pity for their own kind, much less ours.
Read more »
Posted by Theresa Snyder (3su) at 11:40 AM No comments:

“Tal’on could not stay away from Delevy,” Mul’drak said. He mantled his wings up over his head stretching them almost to the ceiling of the cave dome. He gave a big yawn, his large pink tongue rolling out its full length. The old dragon smiled wearily and shook his hand. “The young dragon’s bond was too strong. Over the next two years he ‘jumped’ to Delevy’s village often. The town grew to know him and though they did not understand his speech, they grew to enjoy the presence of the young dragon.”

“Delevy found she had extended family still living in the village,” Rudd’ard explained. “They and Tal’on helped her build a small home. They built a pole-barn nearby and Tal’on slept there, with Delevy at his side, on his visits during bad weather. But the Valdare’s world was changing. Even though their village was far away and they had kept to themselves, and hence out of the war between their people and the Sandcor, it eventually encroached on their world.”
Read more »
Posted by Theresa Snyder (3su) at 1:54 PM No comments:

Tal’on paced impatiently in the courtyard. He had not been able to share the cell with Delevy in months. He had grown too much to make it through the door and down the stairs. The Valdare staked him in the courtyard when he was home and brought Delevy up to him in order to keep him pacified and quiet during the days he was free from fighting their war or recovering from injuries inflicted by the same.

The jailer, who had become a friend of sorts, was fetching Delevy. Tal’on and Graf’tal landed in the courtyard. The rest of the dragons took up residence on the spires and wall of the building built around the yard. They caught the jailer on his way to take Delevy and his other prisoners dinner. He still did not speak Tal’on’s language, but he understood the young dragon’s demand for his companion. He also noticed right away Tal’on no longer wore the collar which kept him in a submissive state. The jailer hustled down the stairs to release Delevy.

Tal’on lay on his belly with Delevy curled up against his chest in the crook of his front leg. She had finally fallen asleep.

After he surrendered in the stadium, the Prime revealed many things from the safety of his perch in the box overhead. He explained that the collars they both wore had tracking devices built into them and if they were to try and remove them, they also had an explosive device in them that would be activated and no doubt decapitate them.

Tal’on did some snarling and growling at this point, but the Prime calmed him by threatening to activate the explosive device in Delevy’s collar if he did not behave. The guards escorted them back down here to his cell. The good thing was he now knew where he was and the way out should he chose to leave. He had no doubt he could knock down the cell door and escape. The question was could he do it with Delevy and not get him or her killed in the process. And, how far did they have to be from the Prime and his detonation device before they were safe? Or was there a safe distance?
Read more »
Posted by Theresa Snyder (3su) at 2:02 PM No comments:

When Delevy left that afternoon, Tal’on went to the wall to retrieve the Sollen. He smiled to himself as he extended a claw to pry it from its hiding place. He had not paid attention where he was throwing his fire earlier and it hit the Sollen. Now as he flicked it into his paw with one long claw it not only vibrated, but it sang. It sang softly, but it sang. He tilted his wedge shaped head and studied it. Could it have been the blast of dragon fire? It had to be. He had done nothing different to it.

Perhaps he only needed to hit it a few more times before it would be loud enough for Graf’tal to hear and come for him.

Provided he had not jumped too far.

He had to be within hearing range.
Read more »
Posted by Theresa Snyder (3su) at 5:58 PM No comments:


The Prime stood before Tal’on dressed in his official military garb. His chest was covered with metals. His three cornered hat sat jauntily on an angle. Though his guard protectively surrounded him, he wore his ornamental saber on one hip and his blaster on the other. He was further equipped with one of the pain sticks Tal’on had become so familiar with in the past when confronted with the Prime’s guard.

“Delevy tells me you can understand and speak our language now,” the Prime said as he tapped the end of the pain stick against his tall black boot tops in an intimidating way.